Although the Family Tree is simplified to the paternal Fox line, it is big!  Click on the image below to open it in a second page where names can be amplified using the + button in the lower right corner.

Lettered Names:  Notes are below

A.  Thomas Fox - Elder of Smalldale

The title 'Elder' is likely used to distinguish himself from his son.

B.  Samuel Fox - Owner of the family bible

Bible is bound together with the Book of Common Prayer.  Click on the thumbnail images below to open the photos in full size.

Married to Rebecca Bradwell (August 19, 1832 - March 7, 1868) at the Parish Church in the Parish of Hope on December 13, 1852.    John and Rebecca lived on Netherside - a street that runs through the centre of Bradwell where Rebecca had lived with her family before marriage.  John worked as a farmer and together they had seven children.  1851 England Census for Rebecca Bradwell / Derbyshire, England, Church of England Marriages and Banns, 1754-1932 for John Fox

Will of 1870 George BRADWELL of Bradwell mentions:

Written on back - "This is the only one he has and I asked him for it. "
John Fox (left) and William Jeffery on the bridge over Bradwell Brook with the Bridge Inn in the background.

After Rebecca passed away John married his second wife in 1871  - widow Priscilla Ann Bennett (January 1840  - April 20, 1900), and had one more child - their daughter Delia.  Priscilla brought to the Fox household a daughter from her first marriage called Elizabeth Howe.  Elizabeth married Eligah Middleton in 1888; they too had a daughter, also called Delia. 1841 England Census for Priscilla Bennet / 1891 England Census for Delia Middleton

John's house is the same establishment his daughter Delia bought after her mother's death (re: Jemima's letter dated January 1st 1901 on the Correspondence Page).  It's also where Herbert and Eliza stayed on their visit in 1949.

John and Priscilla ran a Grocery store in Bradwell;  he mentions supplying the store's inventory with his own crops in his letter to Isaac Arthur:

In regards to the first part of your letter, the least I say upon that subject the better, I think. I was glad to here from you, though it is the first epistle I have received from you since leaving England, which I suppose will be about seven years. I am happy to say we are all very well in health also much pleased to hear that you are well satisfied with your Change.

Emma Jane lives at Bradwell, has two Girls and one Boy. Hannah lives Sheffield, one Girl. Elizabeth lives at Bradwell, one Girl, Jemima not married, living near Cheedle in Cheshire. I am very pleased to here of you doing well. I can only say of my self that it is the reverse of that, though now I hope and think there will be some improvement.

It is no new experience to either of us where we have Cattle for them to be ailing in some way or other, therefore this is the terms upon which we have any kind of live stock, but I have no Cattle of any kind as I am badly qualified to look after them. I have my own land and two fields at Eccles belonging to the [Uniterians ?], four acres. I grow Potatoes and Corn for meal, which we sell in the shop. On Sept the 10th we got the first load of Coal from the new Station (illegible) at the Laneside near Brough. To day Coal in Bradwell is £1.4.0 per ton. The mining industry has [illegible] the population has decreased to under one thousand from 1500 and last Saturday the drink shops had to close at 10 o’clock. We have a many visitors to Bradwell in this summer but of the poorer stamp.

I saw M. Wragg of Netherwater the other week, he asked me about you. They have had no tidings of you for a long time. They are all well, I believe, but their farming is a very lean business.

Little Hucklow is nearly as deserted. More than one half of the homes are uninhabited and falling into ruin and a colony of Pot and Basket Hawkers has settled in the place. Ben Wragg of Quarters was compelled to leave his farm, Nesfield sold him up. He went to live with his sister at Chesterfield but died in a few days, heart broken. Abraham Rowath lives at the place. Tom Fox lives at the Hall farm, repaired the House, put a new slate roof upon it. Albert Fox lives at Joseph-place, not married, also he has John Halls farm, he is dead & wife. The Weslans [Weslyans] has repaired their Chapel at a cost of £1230.0.0, made it very nice with portico in front the Board School has been condemned, and the Board are, in every probability, will build a new one on the netherside cost £600.0.0. Charles Revil died on Thursday, after a long illness, last of family. Julia Oldfield is dead, oldest daughter of Isaac Somerset. Also her sister, Mrs. Bradwell at the Newbridge Inn has married Abraham Needham of Newwall Nook, therefore the house your grandfather built at the cost of £600.0.0 is now lost to the family. Isaac Eyre of Sheffield married Elizabeth Colleral [?], lived at Bradwell when the said Eyre was Policeman at Bradwell. He died very suddenly, he was Executor to M. E[illegible] Rachel Bradwell’s Husband. Sister to Eyre, wife M. E[illegible] & daughter had £1000.0.0 left in the burrow. There is nothing left, mother & daughter, are thrown into poverty as his liabilities are £3000.0.0 or over. Some say he poisoned himself.

Some time since we received a photo of your self, wife and children. Elizabeth appears to be getting stout and the Children as you say are all grown and look well. We had George here two weeks back, his wife being at Hathersage. (Wakes ?) we join in love and best wishes to you all.

I remain yours, ever the same, Your Father, John Fox 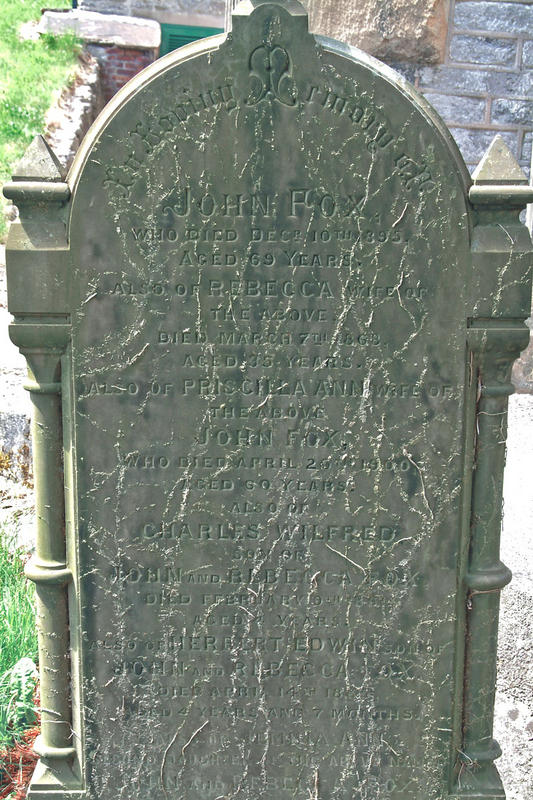 Letters between Isaac and his siblings living in Britain can be read on the Correspondence Page.

Letters from Elizabeth Jane's sister, Hannah Wragg, can be read at the bottom of the Fox Ancestry Page.

Hazelbadge Hall Photo Postcard.  On the back is written:

This is where the knives and forks were used.  I was 16 when my grandfather died and he was in his 84th year and I shall be 80 next so they must be getting on for two hundred.  I am going to be writing Hannah for a while.  So (illegible) will find me:  many thanks for all your kindness Love to all, Aunt Jennie

Working as a nurse on the imbecile ward at Fir Vale Union, Jemima remained childless and unmarried.  Her opinionated correspondence to her brother Isaac shoots straight from the hip with her regard for her step-mother and half-sister,

Worked as a bus driver (horse and carriage) and later a pork butcher in Manchester.  He and sister Hannah's husband took charge of the legalities of the family inheritances.

Florence passed away after their 2nd child was born.  George married again to Evelyn Lees and had two more children, Robert and Evelyn.

John Reginald, immigrated to North America and lived in New York with his wife before becoming sick.  He moved to Toronto (probably to be closer to his aunt Jennie and family) and passed away in the Toronto Hospital for the consumptives on February 14, 1924.  Ontario, Canada, Deaths and Deaths Overseas, 1869-1947 for John Reginald Fox

Hannah continued to write to her nephew Herbert in Hamilton after his father passed away.

Herbert and Eliza stayed with Delia on their trip to England in 1949.  Her house on Netherside in Bradwell that had belonged to her father John was built in 1658 of Derbyshire sandstone and 24 inch thick walls.

Mollie, also called Mary , was an artist.  She completed this painting of Anne Hathaway's Cottage, and gifted it to the Canadian Foxes.